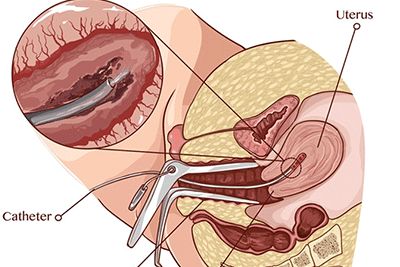 Endometrial scratching is an outpatient procedure, which is relatively painless. It is similar to cervical smear test and is defined as medically administered damage to the inner lining of the womb, with the sole aim of improving implantation. It was first demonstrated as a beneficial procedure in reproductive medicine in 2003.

A Cochrane Library systematic review published in 2012 concluded that the technique doubles the implantation rate.

Implantation remains the biggest hurdle in securing a pregnancy in assisted conception. When the microscopic embryo quality appears good and the development of the endometrium is satisfactory on ultrasound, it is difficult to explain why implantation does not occur.

Embryo implantation into the womb could fail due to poor embryo quality or abnormal embryo genetics. It can also fail due to poor ‘endometrial receptivity’;this is where the lining of the womb is not favorable for the embryo to implant.

When it is reasonably assumed that the reason for a recurrent or failed IVF cycle is an implantation failure, especially when the embryo is of good quality, then endometrial scratching might be employed.

Quite simply, to get pregnant, you need to have a healthy genetically fit embryo and a good endometrial environment for it to implant into.

So, when it is reasonably assumed that the reason for a (or recurrent) failed IVF cycle(s) is an implantation failure especially when the embryo is microscopically of good duality, then endometrial scratching might be employed in order to aid implantation and then IVF treatment success.

HOW DOES ENDOMETRIAL SCRATCHING AID IMPLANTATION?

The process of endometrial scratching as it relates to embryo implantation is not entirely understood and Some questions still remain unanswered.

Scientists involved in the studies believe that there may be two reasons for the increased implantation rates:

2. Gene switching with the endometrium. Scientists speculate that sometimes embryos fail to implant due to genetic switching related to endometrial receptivity. That is, genes responsible for implantation of embryos are not switched on during the time when embryos are supposed to implant. Endometrial scratching may increase expression of genes (switching of genes) thought to be responsible for the preparation of endometrium for implantation.

HOW IS THE PROCEDURE CARRIED OUT?

The procedure which usually takes about 15 minutes or less is carried out in the luteal phase of the cycle (i.e. after ovulation) in the cycle preceding IVF treatment. Normally this is done between days 19-23, (day- 21 ) of the cycle, on the average and that is what we do at Nordica Fertility centre.

It can also be performed under anesthesia during a hysteroscopy evaluation of the uterus. An informed consent is taken and the client is administered oral analgesics about 1-2hrs prior to the procedure.

A speculum will be passed to find the cervix, which is then swabbed with a saline solution to clean it. A small disposable endometrial biopsy catheter (Pipelle) is then passed 6-7cm through the cervix into the uterine cavity.

The catheter is then agitated in the uterine cavity and suction applied to lightly cause minimal injury to the endometrial lining. Antibiotics may be required after the procedure.
It may be followed by some mild uterine cramping and/or slight bleeding per vaginum.

At Nordica, we have employed the use of endometrial scratching successfully for a couple of our clients with previous failed IVF cycles despite good quality embryos in the past few years. Although the benefits of endometrial biopsy scratching are undeniable, fertility specialists are still debating the exact timing and the number of biopsies. Fertility doctors agree that the scratch biopsy needs to be done once or twice before embryo transfer.

The additional benefit this procedure offers is that it allows us to map the cervical canal. Also, it’s very similar to a dummy embryo transfer and makes the actual embryo transfer much easier.

(1) A simple scratch could double success of IVF treatment

(2) It is a straightforward less than 15-minute procedure

(4) There are no serious side effects