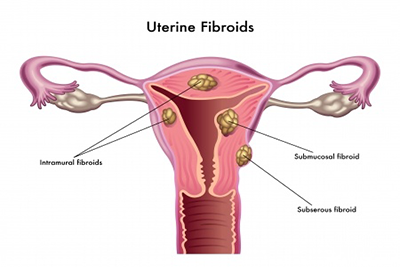 Larger fibroids, especially those that protrude on the outside of the uterus may be felt during a routine pelvic exam. However, in an infertility center, most fibroids will be detected by ultrasound. Ultrasound allows the detection of much smaller fibroids than can be appreciated by a pelvic exam.

Other diagnostic methods are:

Hysteroscopy
Insertion of a fiberoptic telescope through the vagina and cervix and into the uterus can detect fibroids that are within the uterine cavity or causing significant distortion of the cavity. Hysteroscopy cannot detect fibroids in the muscular wall of the uterus unless they cause distortion of the cavity. It is also unable to identify even large fibroids that are located outside the wall of the uterus.

Surgery
Occasionally fibroids are identified during an abdominal surgery such as a laparoscopy . This is useful for fibroids that cause distortion of the outer contour of the uterus or those that are only attached to the uterus by a thin stalk.