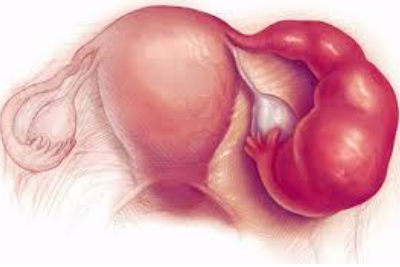 Symptoms of serious infections commonly occur toward the end of the menstrual period or during the few days after it. For many women, the first symptom is mild to moderate pain in the lower abdomen, which may be worse on one side.

Other symptoms include irregular vaginal bleeding and a vaginal discharge, sometimes with a bad odour. As the infection spreads, pain in the lower abdomen becomes increasingly severe; women may have pain during sexual intercourse or urination. The infection may be severe but cause mild or no symptoms. Symptoms due to gonorrhoea tend to be more severe than those of a Chlamydia infection, which may not cause a discharge or any other noticeable symptoms.

Sometimes infected fallopian tubes become blocked. Blocked tubes may swell because fluid is trapped. Women may feel pressure or have chronic pain in the lower abdomen. If infection of the fallopian tubes is due to a Chlamydia infection, it may spread to the tissues around the liver. Such an infection may cause pain in the upper right side of the abdomen. The pain resembles that of a gallbladder disorder or stones.

Pelvic inflammatory disease may be detected only later when there is trouble getting pregnant or if there is chronic pelvic pain. The longer PID treatment is delayed, the more likely you are to have permanent damage. Similarly, each recurrent pelvic infection increases risks of tubal infertility, chronic pelvic pain, and ectopic pregnancy.

It is estimated that one woman in five women with PID becomes infertile as a result. This means they will be unable to get pregnant naturally. PID can make a woman infertile by scarring the fallopian tubes so severely that it makes it impossible for the egg to travel down into the womb. Delaying treatment for PID can increase your chances of becoming infertile.