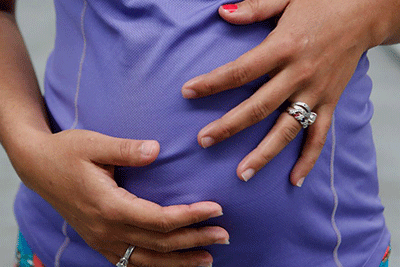 Many people get married with the intention to raise a family, but sometimes their intention doesn’t go as planned. In this part of the world, it’s known that one out of five couples is faced with the problems of infertility. The causes can be from the male or the female, combined or unexplained.

Ovulation is a very important topic in reproduction, this is a process where the egg is released, it may or may not be fertilized by sperm. The eggs shed out as menstruation if not fertilized unless it meets with sperm and it implants to develop into a pregnancy. The woman’s egg is only viable for 12-24 hours after it has been released, so it is better if the sperm is already within, because sperm can survive for 3-5 days in a woman’s reproductive system.

Most people ask, how to know when ovulation occurs? The general rule of thought is that ovulation occurs about 14 days to the next period, but it is wrong, it occurs 12-16 days to the next period. It is possible to use home ovulation kits, it detects the early surge which comes before the egg is released, and three days after the home ovulation kits becomes positive, it is important for couples to have sex if they want to achieve pregnancy.

Another way to know if a woman is ovulating is cervical mucus. A doctor or a nurse can teach, how to check for this. If a woman squats and puts her hand inside her vagina, she can touch something that has the same texture as the nose and can actually see the discharge that comes out of it, you can look at the amount and appearance of this cervical mucus. Before ovulation, the cervical mucus increases, it becomes thinner, clearer and more slippery. It is advisable that you should have sex every other day during your fertile window if you want to achieve pregnancy, the fertile period is about 6 days in every month which is 5 days before the ovulation and the day of the ovulation. Now there are many apps and websites that are available and can help solve this, but not all these websites and applications are accurate as they claim to be, so you can still rely on the home ovulation kit.

Regarding sex positions, there are some tips spoken worldwide that favour pregnancy which is not true, no matter the position, as long as sperm is deposited in the woman’s body during her fertile period and the sperms are good, then she can get pregnant, neither is it necessary for a woman to lie on her back for a period of time after intercourse in other for her to get pregnant. For you to get pregnant you need to have healthy body weight, research has shown that being either overweight or underweight are not favourable for getting pregnant, if you are overweight you might have to wait twice as long as someone who is of the ideal body weight, if you are underweight you might have to wait as long as four times as someone who is of the ideal weight before you can get pregnant. The way that being overweight disturbs fertility is with ovulation, because body fat also secretes a form of estrogen, and if you are trying to get pregnant when you are overweight, it is better to lose 5-10% of your body weight, it changes the system, therefore, encourages fertility in people who are trying to get pregnant.

The Center for Disease Control (CDC) in the US urges women to take 400 micrograms of folic acid every day for one month before conception, so when you are planning on getting pregnant, it is better you start on folic acid, you never go wrong with that.

It is also important to eat healthy foods, this is why there is no fertility diet, it is important to eat meals that is rich in antioxidants zinc and folate because antioxidants deactivate the free radicals in the body, which can damage sperm and egg cells. Foods rich in antioxidants are dark free green leaves vegetables, broccoli, cereals, beans, citrus fruits, orange juice and walnuts are also good. But in this process, you must avoid trans-fat if you are trying to get pregnant. Examples are margarine, fried foods, baked foods rather you should embrace monounsaturated fats like olive oil, it is best to cut down on carbs in other to maintain healthy body weight and also reduce insulin levels, especially refined carbohydrates like sugary foods and drinks, white pasta, bread and rice, must be taken in controlled portion and more fibres, fruits vegetables should be taken. It is best to swap protein sources and replace animal protein like meat, fish and eggs with vegetable proteins like beans nuts and seeds.

Being active is also important but it’s better to avoid strenuous workout because very strenuous workout can lead to menstrual disorders. And during periods, there is the need to avoid drinking alcohol and hard drugs, because there is no doubt that nicotine in cigarette speed up egg loss. Another thing to be careful about is second-hand smoking it is recommended that you should not exceed 500grams of caffeine per day, so taking one to two cups is okay, but after that, it might just be too much.

It needs to be noted that fertility is related to age, for a woman in her 30s fertility starts to decline and it takes a very sharp turn at 37. When you are 30-32 years old and you are not ready to start a family, it is advisable to store your eggs, so that when you are ready, your eggs will be the same age as when you stored them. Why is this age related to fertility? The first thing is egg quality in women, egg quality goes down with age, sperm quality goes down with age too, but it happens later in men, in women, there is an increased rate of some other types of diseases that might finally lead to infertility for example, fibroids tend to grow as you grow older, endometriosis tends to get worse and the chances that you will contact either sexually transmitted infections increases, the chances that tubes will be blocked also increases.

This is why it is important to seek medical help before time runs out because the chances of achieving pregnancy are high when you seek attention when you are younger. When asking for help it is important to make research and find the perfect fertility clinic, that you are comfortable with and the people that are going to accompany you on this journey of fertility.