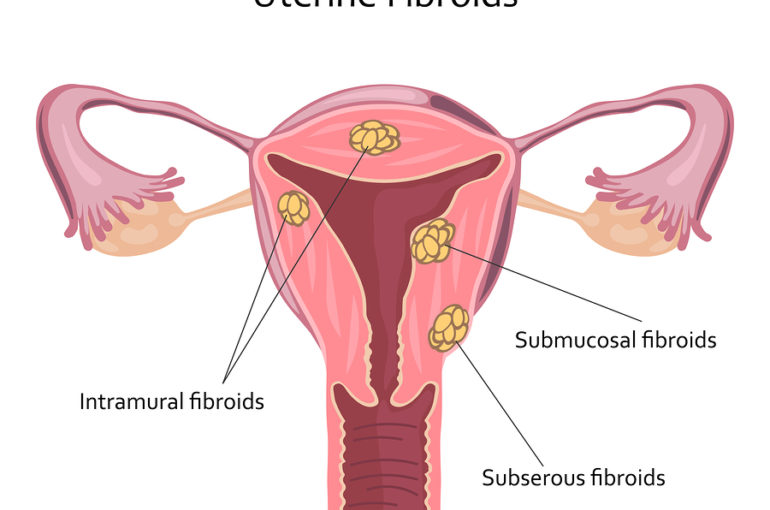 Uterine Fibroid (or Fibroid) are noncancerous growth on the muscles of the uterus which sometimes cause severe abdominal pain and heavy period when the tumour becomes quite large. It is present in about 70% of women in a lifetime and about 40% of especially black women in reproductive age group. It is a common gynaecological condition, but most women don’t notice they have fibroids because there are no symptoms but realize afterwards when the tumour grows.
The most common symptom will be heavy menstrual flow and can increase the risk of miscarriages in certain circumstances. In the United States, it cost about 34billion USD every year to treat fibroids. The cause of fibroid is unknown but can be traced to the genes, it runs in families and can be linked to female hormones (Estrogen and Progesterone) also.

There are three main types of fibroids

Fibroids are usually without symptoms, but the growth in the size of tumor, the location and the number of fibroids can lead to the commonest symptoms.

Fibroid can be diagnosed with different methods; examples are physical imaging (ultrasound), magnetic resonance imaging (MRI) and hysteroscopy. Hysteroscopy can be used to diagnose and also treat fibroid. This procedure allows a doctor look inside the uterus in order to diagnose and treat the causes of abnormal bleeding. It is very useful for submucous fibroid that stays inside the lining of the uterus.

Intersection between fibroids and infertility

Fibroids on their own rarely cause infertility, a lot of people feel fibroids, is the cause of their infertility. The American Society for Reproductive Medicine says, you see fibroids in about 5-10% of women suffering from infertility, but as a sole cause of infertility, fibroids only account 1% – 2.4%. For fibroids to cause infertility it’s either blocking the two tubes, (the tubes entering the uterus) or the tumour has grown big to occupying where the baby is supposed to be, (that is the submucous fibroids). It also affects implantation influencing the movement of the sperm and the egg in the tube and blocking tubes affecting when implantation will take place either by changing the shape and affecting the receptivity of the uterus to the fertilized egg.
Fibroids rarely cause infertility but can increase the risk of pregnancy losses, so thorough assessment should be carried out before any conclusions. Fibroids might be associated with adhesions in the pelvis that is scar tissues. When fertility is affected by uterine fibroids, the only treatment is to perform surgery to remove the tumour, because when infertility is also part of the equation, drugs don’t help, most of these drugs stop menstruation and ovulation. It’s not all fibroids that need to be removed, every fibroid must be properly assessed by a gynaecologist who is experienced to advise on what’s proper to do.

How can fibroid affect fertility?

After removal of fibroid, can the effect of fertility be improved?

Yes, we might be sure on one end and not sure on the other end depending on the type of fibroid the patient suffers. For submucous fibroids, there is no doubt that any size of fibroid attached to the cavity of the uterus will affect fertility and it should be removed. A lot of people give birth without removing their fibroids, but when they are big, they can actually affect implantation. Removing fibroids when implanted in infertility can improve the chance of getting pregnant.

Can fibroid grow back?

The unfortunate answer is yes, in 15-51% of patients, fibroids grow back, after removal of fibroids, it is important to do something about fertility because it can come back.

What if you remove fibroids, can the effect of fertility be restored?

Yes, we might be sure on one end and not be on the other. For submucous fibroids, however, there is no doubt that any size of submucous fibroid attached to the cavity of the uterus will affect fertility and it should be removed using hysteroscopy. The ones that are in the wall of the uterus which we call intramural of up to 4-5cm do not need to be bothered about. A lot of people give birth without removing their fibroids, but when they are big, they can actually affect implantation.

How long can you wait after fibroid surgery before you can attempt to get pregnant?

From about 6 weeks if you did the hysteroscopic surgery, especially if you are planning to do IVF and about 3 months if you did abdominal surgery. The type of surgery will affect the time basically. The myth that you have to wait for 1-2 years is not true; the very worst will be about 3-6 months.

Can fibroid grow back?

The unfortunate answer is yes, in 15-51% of patients, fibroids grow back. When you remove fibroids, it is important that you do something about it quickly because it can come back.

If people get pregnant with fibroids, does it have any effect on pregnancy?

Yes, there is:
• The incident of the placenta separating during delivery -abruption could happen and this can actually lead to fetal demise, so it is important that when you have fibroids and you are pregnant you get appropriate antenatal care and you are also vigilant in case of any pain that you cannot explain, you must go to the hospital immediately.
• It can also lead to abnormal growth of the baby because the blood supply might be affected.
• Preterm labour or delivery

In summary, there is no doubt that fibroids affect fertility, but as the sole cause of infertility, that is rare. Location is the most important thing when talking about fertility and fibroids. Undergoing surgery to remove fibroids when done carefully and appropriately increase the pregnancy rate. However, because the treatment of uterine fibroid itself might lead to infertility and difficulty in the treatment of infertility; it is always advisable to tread with caution.

An experiment was carried out where, 3000 women who had hysteroscopy about 61% of them had abnormalities in their endometrium and 50% of this 61 % was due to the treatment of fibroids, that is why it is not every fibroid that needs to be removed if you remove fibroids that do not need to be removed you might end up with a bigger problem, like the scarring of the endometrium. This is why it is important that you get good evaluation and an experienced gynaecologist who is knowledgeable about fertility-related issues.