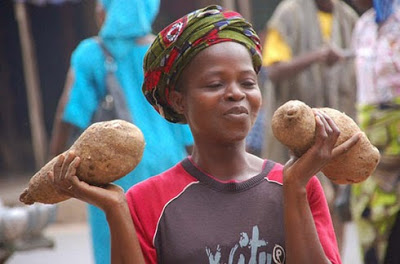 Yams first got their rep as a twin-maker after researchers started looking into why the African village of Igbo-Ora has one of the highest rates of twin births in the world. The only thing they could come up with? Apparently, the people in Igbo-Ora are crazy about their yams. Population experts say that the small town of about 100,000 people in the south-west has the world’s highest twinning rate. In fact, on the road going into the town there’s a large stone plinth which welcomes visitors to “the land of twins”.

This is quite a remarkable phenomenon, but nobody seems to be quite sure why this town should be more twin prone than anywhere else on earth. However researchers have long speculated that it’s the diet that can help explain this statistics, specifically the daily diet of yam!!!

What?!! Yes, yams. Apparently it contains phytoestrogen, an estrogen compound that increases a woman’s Follicle Stimulating Hormone (FSH), and may induce a higher rate of ovulation. This chemical component is concentrated in the peelings from yam, and it has been linked to a hyper ovulation—the release of more than one egg, which usually leads to twin pregnancies. This theory has me completely baffled.

Another study has linked yams and fertility, but the study was the result of a Yale student’s research and has yet to be officially proven. In other words: The jury’s still out on this one!