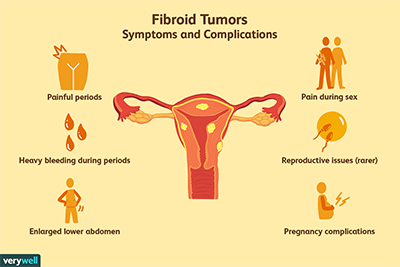 The majority of fibroids are small and do not cause any symptoms at all. But many women have significant problems that interfere with some aspect of their lives and want to be treated. The symptoms are related to the number, size, and location of the fibroids, and fall into four main groups:

Increased Uterine Bleeding
Fibroids may cause the menstrual bleeding to be heavier, or increase in the duration of bleeding or may cause bleeding in between periods. Some women may have a combination of bleeding symptoms. The presence and degree of uterine bleeding is determined mainly by the location of the fibroid. Women with fibroids that protrude into the uterus are more likely to have significant increase in bleeding.

Pelvic Pressure And Pain
Fibroids can range in size from microscopic to the size of a basketball or even larger. Larger fibroids may cause a sense of pressure and fullness in the abdomen, similar to that caused by pregnancy. Fibroids of variable sizes can cause other symptoms depending on where they are located. For example, if the fibroid is pressing on the bladder, frequent urination can occur. A fibroid that pushes on the rectum can cause constipation, and one that puts pressure on the cervix can result in painful intercourse.

Infertility And Miscarriage
Fibroids may cause infertility in a number of different ways. A fibroid may cause compression on the fallopian tubes resulting in a blockage of the passage of sperm or eggs. A large fibroid may distort the pelvic anatomy sufficiently to make it difficult for the fallopian tube to capture an egg at the time of ovulation.

Another theory suggests that even small fibroids that grow inside of the uterine cavity may act as a foreign body and result in an inflammatory reaction that makes the uterine environment hostile for an embryo to implant.

Some of these same possibilities may also increase the risk of an embryo to miscarry. Another possible cause for miscarriage is “running out of space” as the fetus grows.

Pregnancy Complications
Some studies have suggested a slightly increased risk of certain problems during pregnancy in women with very large fibroids, including difficulties with labor, breech presentation of the fetus, premature rupture of the “bag of waters”, and abruption placenta (a condition in which the placenta separates from the uterine wall during the pregnancy).

These problems are more likely if the placenta is implanted over the area of the large fibroid.

However, many women with fibroids have completely normal pregnancies and deliver healthy babies with no complications.