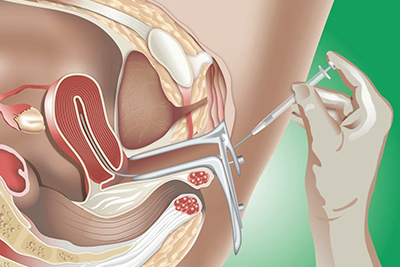 Although various definitions have been used, ART includes all fertility treatments in which both the eggs and sperm are manipulated.
In general, ART involves surgically removing eggs from a woman’s ovaries, combining them with sperm in the laboratory, and returning them to the woman’s body or donating them to another woman.
Some forms of ART are also used in fertile couples for genetic reasons. ART is also used in couples who are discordant for certain communicable diseases, e.g. AIDS, to reduce the risk of infection when a pregnancy is desired.
The term includes any reproductive technique involving a third party e.g .a sperm/egg donor.
In addition, ART is often categorized according to whether the procedure used a woman’s own eggs (non donor)or eggs from another woman(donor)and according to whether the embryos used were newly fertilized(fresh)or previously fertilized, frozen and then thawed(frozen).

Whereas some are of the opinion that IUI (Intra Uterine Insemination) is not part of ART and some believe that it’s part of it but we will go ahead and discuss it as well. 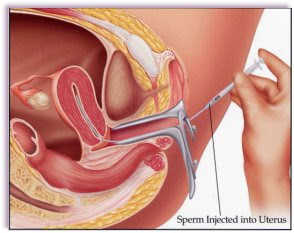 Human artificial insemination with the male partner’s sperm for infertility began in the 1940s.

The IUI procedure can be effective for some causes of infertility in women.

Mild Sperm Dysfunction: Some men may have mild dysfunctions such as borderline sperm counts, reduced motility, or reduced semen volumes.

Women with cervical factors: Occasionally, the mucus found at the neck of the womb may be abnormally unconducive to sperm, possibly due to the presence of antibodies.

Sex selection: After separation of sperm into X and Y bearing samples using Micro sort or any other technique.

HOW IS IUI CARRIED OUT?
1. The woman usually is given medications to stimulate development of multiple eggs and insemination is timed to coincide with ovulation – release of the eggs.
2. A semen specimen is better produced in the clinic by masturbation after 2-5 days of abstinence from ejaculation.
3. The semen is “washed” in the laboratory (called sperm processing or sperm washing). The sperm is separated from the other components of the semen and concentrated in a small volume. Various media and techniques can be used for the washing and separation. Sperm processing takes about 30-60 minutes.
4. A speculum is placed in the vagina and the cervical area is gently cleaned.
5. The washed specimen of highly motile sperm is placed in the uterine cavity (intrauterine insemination, IUI) using a sterile, flexible catheter. This help to bypass the cervix and gives direct access to the tubes.

The intrauterine insemination procedure, if done properly, should seem similar to a pap smear for the woman. There should be little or no discomfort.
Most clinics offer for the woman to remain lying down for a few minutes after the procedure, although it has not been shown to improve success. The sperm has been put above the vagina and cervix – it will not leak out when you stand up. 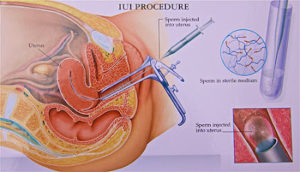 For a couple with unexplained infertility, female age under 35, trying for 2 years, and normal sperm – we would generally expect about:

HOW MANY INSEMINATION DO I TRY BEFORE IVF?
• The short answer is to move on to IVF after 2 or 3 failed IUIs
• Do not consider IUI at all if sperm parameters are poor
• If the female is age 35 or older, or ovarian reserve low, consider IVF earlier
• In vitro fertilization has a significantly higher success rate as compared to IUI